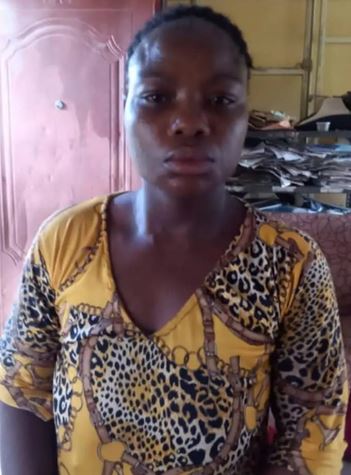 A 39-year-old mother of twins identified as Seun Sola has opened up on why she stabbed her ex-lover, Lomi Alara Akinbinu in Ondo town, Ondo state after a fight ensued between them over N500.

Seun, a food seller, has been arrested and charged to court for unlawfully wounding Alara with a knife.

The suspect reportedly stabbed him in his stomach when a fight ensued between them at Iyalaje market area in Ondo.

A police source told Vanguard in Akure, the state capital, that the suspect, who is a single mother and the victim used to be lovers before they parted ways.

The victim, according to an eyewitness account went visiting the suspect and reportedly met her new lover and became infuriated.

He reportedly insisted that the new boyfriend should leave while he passed the night with the suspect but the suspect declined and a fight ensued between them.

The victim thereafter requested for the N500 he had earlier given to the suspects twins to feed that day.

Seun while explaining why he stabbed the victim said “My ex-boyfriend came to my house in the afternoon and gave my twins five hundred naira for feeding.

“In the evening, he came back to my house and said he would come and sleep over at my place in the night. But I told him that I am not interested in him anymore.

“Then he requested for the money he gave my twins. And I gave him the money immediately. Suddenly, he started beating me.

“He beat me because when he came to my house, he met my present boyfriend with me. He was angry and started beating me.

“So, when I knew he had overpowered me, I used a knife to stab him in his stomach.”

Police source disclosed that the victim was rushed to the Trauma Centre, in Ondo town for treatment, while the suspect was arrested and charged to court.

Meanwhile, Seun has been dragged before the Chief Magistrates’ Court in Ondo town, for unlawfully wounding one Akinbinu Lomi Alara with a knife.

She, however, pleaded not guilty to the charge preferred against her.

The police Prosecutor, Benard Olagbayi, said that the defendant was said to have committed the offence on May 4, 2022, at about 9:30 pm at iyalaje market in Ondo, contrary to and punishable under Section 338(1) of the Criminal Code, Cap 37, Volume 1, Laws of Ondo State of Nigeria 2006.

Olagbayi, who told the court that he would be calling three witnesses to testify in the case, applied for a date to enable him to study the case file.

The defendant counsel, P O Afolayan applied for her bail.

The Presiding Chief Magistrate, Mrs Charity Adeyanju, granted the defendant bail in the sum of N200,000 with one surety in like sum and adjourned the case till May 30, 2022.

Why I Stabbed My Ex- lover Over N500 ― Mother Of Twins