Nigerians woke up to the news that the delectable actress who always carries herself high had belittled herself as she fought dirty in public.

However the cause of the fight wasn’t clearly known, it has been alleged that they fought dirty over Mercy Aigbe’s marriage to Kazim Adeoti.

The video started with Larrit and Mercy Aigbe shading each other. The former was reportedly shading Mercy Aigbe for staking a claim on her husband despite being the second wife, while Mercy retaliated by asking the D.J to play a diss song.

Although the duo did not mention each other’s names at first, Larrit flared up when Mercy Aigbe stood up and said her name. Then, in anger, she threw a bottle at Mercy, who screamed in fear.

Following Omolara’s interview with Gistlover on the fight, Mercy Aigbe reached out to the blog to clarify her name.

Mercy Aigbe humbled herself to beg a controversial blogger not to reveal her secret and hint at why she married her producer husband, Adekaz.

GISTLOVER shared a private conversation she had with Mercy Aigbe, had dragged Mercy Johnson into the discussion as she noted how the actress was also married to someone’s husband.

GISTLOVER boldly stated that she hated Mercy Aigbe because she always flaunt her husband, knowing fully well that he has another wife.

Gistlover pointed out how many female celebrities also got married as second wife yet they maintained their cool and kept a low profile. 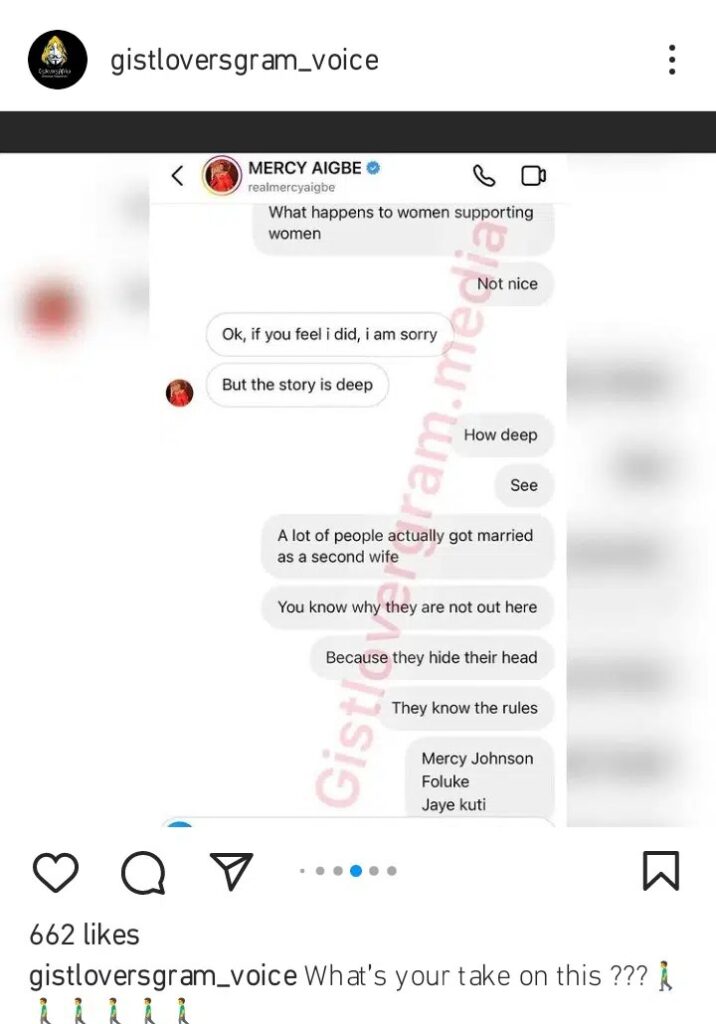