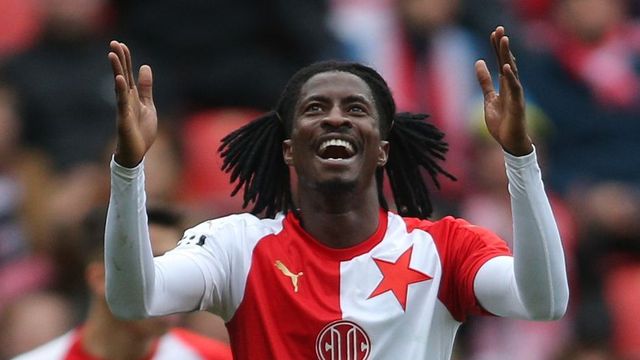 Nigerian forward, Peter Olayinka is on the radar of a Spanish Laliga Santander club ahead of the summer transfer window, according to a football agent.

Olayinka has been in a good goal-scoring form this season, netting eleven goals and helping his team, Slavia Prague to reach the quarter-finals of the UEFA Europa League.

According to reports in Turkey, Fenerbahce are keen on the attacker whose transfer fee has been put at two million euros despite Transfer Market giving him a value of €7m.

And now, a La Liga club is showing strong interest in the Nigerian who has one more year on his contract at his Czech Republic outfit and they may want to cash in on him.

“There is a huge interest in Peter Olayinka from a Spanish club as regards the summer transfer window. Our Spanish partners want to discuss about Olayinka,” the agent said.

Because of his talent, there were numerous discussions about making Olayinka the first foreign player of the Albania national football team. Olayinka himself said that he was willing to play for Albania if he got the Albanian passport. However, in September 2019, he was nominated for an international friendly match between Nigeria and Brazil.

Olayinka started his career with (Baba Boss) in Ibadan before moving to Lagos-based 36 Lion FC football academy, and in January 2012 he joined Bylis in the Kategoria Superiore, where he initially joined the club’s under-19s due to being just 17 at the time. He was promoted to the senior team under Agim Canaj during the 2012–13 season, and he made his professional debut on 20 October 2012 in an Kategoria Superiore game against Luftëtari, in which he came on as an 84th-minute substitute for Jetmir Sefa in the 2–0 win.