She has been alleged to be in a relationship with John Obayuwana for over a year.

Since last year, there has been speculations that the actress is in a hush-hush relationship with the 72 year old businessman.

Controversial blogger, Cutie Julls had shared photos of the couple as she spilled more their alleged relationship.

According to the blog, John Obayuwana and “Terry Waya” are some of the sugar daddies of Lagos.

The post reads, “Awww Sharon Ooja with her big god, Mr John Obayuwana. John Obayuwana is the owner of Lagos popular luxury shop, Polo Avenue. John Obayuwana, Terry Waya etc are the pioneers of the “sugar daddies” of Lagos. Awwww Sharon, do I say congrats for making daddy have constant fun? Aww aww. Congrats Sharon….. Oya, online in-laws please gather. At least this one has better behavior than Ned. I heard he is not like the regulars who will chew goro and garlic and won’t brush B4 kissing somebori. Awww Sharon baby”.

Months back, Sharon ooja Egwurube, who described herself as “sexy and womanly” took to her Instagram page to share some sensual swimsuit photos of herself as she enjoyed a luxury yacht trip in Marbella, Málaga.

Sharing photos, Sharon Ooja, declared that she is genuinely living her life, and she urged her followers to try it as well.

“Im genuinely living my life …. You should try it ❤️flaws and all❤️”, she wrote. 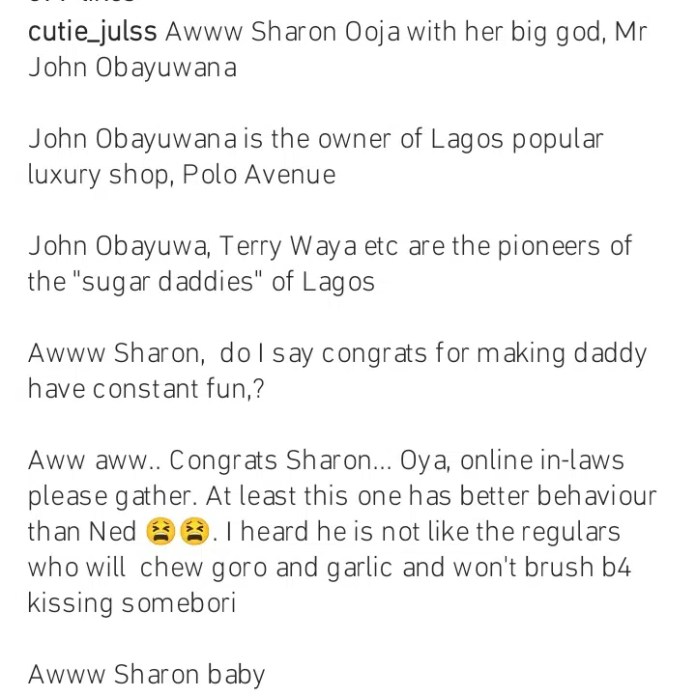