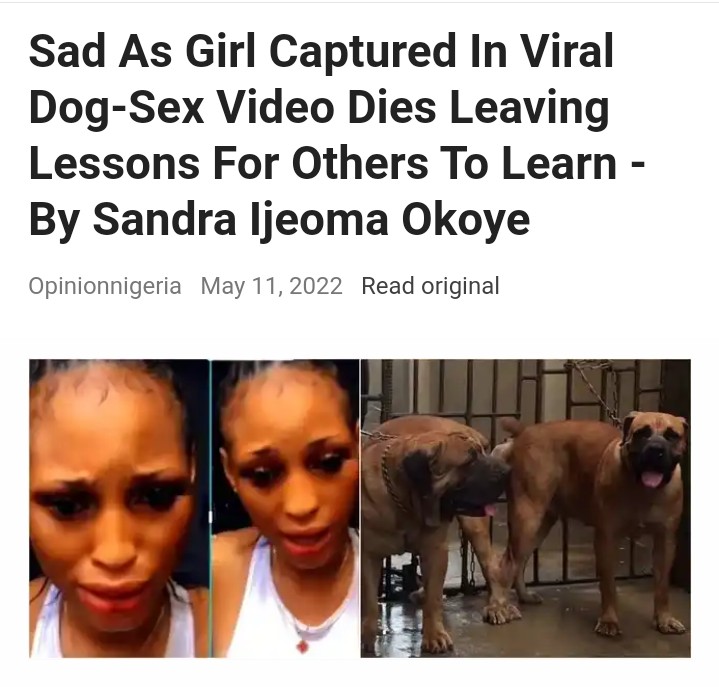 The young lady, simply identified as Mirabel who trended in a viral video having sex with a dog in the Lekki area of Lagos has reportedly died of infection at a private hospital in Yaba.

As reported by Daily Independent online edition, and several online news platforms on May 10, 2022, it was learnt she died of canine brucellosis on Monday.

The reportages which has assumed viral dimension have it that an eyewitness said the lady had been on admission since Sunday last week after she collapsed and went into a coma.

It was also added that the deceased confessed to the doctor when the test result showed that she was suffering from what looks like canine brucellosis, and which can only be contracted from a dog. According to the medic, canine brucellosis is a contagious bacterial infection caused by the bacterium, BrucellaCanis (B. canis).

She said bacterial infection is highly contagious among dogs. Infected dogs usually develop an infection of the reproductive system or a sexually transmitted disease.

“The lady had other underlying infections which were worsened by the presence of B. canis.

“She told my boss that she had been having sex with dogs for more than three years now.”

The doctor in charge of the hospital said: “This should be a private matter. How did you get to hear that? Of course, we lost a patient today (Monday) at our hospital and that is all I can say for now. You can go back to whoever gave you the information and get details. I am busy now; thank you,” he was quoted to have said.

At this juncture, it is expedient to say that Nigerians will not easily forget how Mirabel, alias Veegodessmade a viral TikTok video claiming she slept with a dog for N1.7 million, but later recant her confession by saying that she was merely “catching cruise”, a slang for joking.

She had claimed in the video, that contrary to what people think about sleeping with a dog, that she had never contracted any disease.

“What is the big deal there? I only slept with a dog, I didn’t kill somebody. You, in your life, you have done worse and besides, have you seen N1.7million before? As if it’s a big deal. And mind you, I’m not infected or anything. Stop dying on the matter, I’m enjoying the money”, she stated in the first video.

But following backlash from Nigerians who condemned her for the act, the lady recanted. She posted two more videos in which she debunked her earlier claim, begging Nigerians for forgiveness. The lady explained that it was a prank and advised people to shun bestiality.

She said: “Guys I was just catching cruise. I didn’t sleep with any dog. My boyfriend just broke up with me; help me to beg my boyfriend. I’m sorry for the video I made, it was purely cruise.

“I can’t advice someone to be with animals. It was just a prank video, just cruise; you guys know Nigerians and cruise. I apologize to the public, please take my apology.”

Since then, not few Nigerians have been in shock following her confession and seeming afterthought denial.

In as much as I extend my sympathies through this medium to her family, it is not a misnomer to say that her passing unarguably left a huge lesson on its trail for other girls that has bestial predilection to draw from.

In fact, when her video was trending, particularly as social media platforms were awash with it, not few medics warned that the mess she got herself into was risky. Not only that, there have been questions about the act which many described as ‘unclean or taboo’.

Against the foregoing backdrop, not few health or medical experts warned that such act could spark off emerging infections across the country.

According to the experts who were unanimous in their advice, sex with animals is not only unclean but a potential source of health-related issues.

Again, it is expedient to opine that in as much as her death deserves sympathies from this writer, and perhaps from some other people that she has no doubt left a huge lesson for other to learn from. May her soul continue to rest in peace!