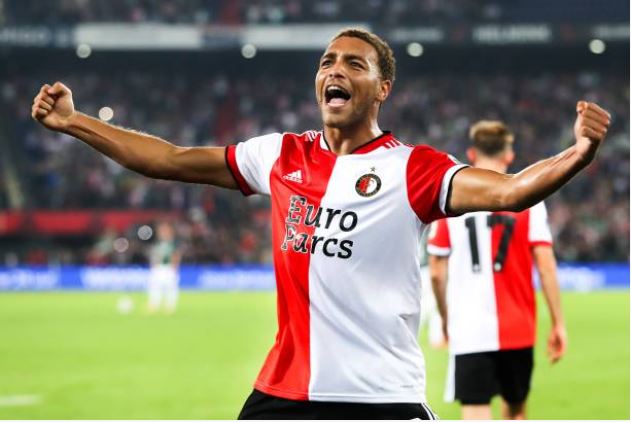 Feyenoord striker Cyriel Dessers has expressed his delight following his recall to the Super Eagles ahead of the doubleheader friendly games with Mexico and Ecuador.

On Tuesday, a 30-man squad was unveiled for both friendly games which will take place in the United States.

His only cap for the Eagles was on 13 October 2020 in an international friendly game against Tunisia which ended 1-1.

And reacting to his recall, the 27-year-old striker wrote on his Twitter handle:“We’re back, let’s gooo

It has been a productive loan spell for Dessers at Feyernoord thanks to his exploits in front of goal.

Dessers has scored 19 goals provided four assists in all competitions for Feyernoord.

In the Eredivisie, Desser has scored eight goals made two assists in 26 appearances.

It is in the newly formed Europa Conference League that Dessers has been prolific, scoring 10 goals two assists after 12 games.

His impressive performance for the Dutch side contributed to their qualification to the final where they will face AS Roma.

During the 2013–14 season, a 19-year-old Dessers stood out in the reserves and youth competitions for OH Leuven, scoring over 20 goals.

With OHL in danger of relegation and several first team strikers either out of shape, injured or suspended, he was given his first minutes in the first team in a 3–2 away loss against Mons.

In April 2014, Dessers signed a two-year deal with Lokeren.

In July 2016, he signed with NAC Breda on a contract until summer 2019, of Dutch second-tier Eerste divisie. On 28 May 2017, they were promoted to the Eredivisie, after a 1–4 victory over N.E.C., in which Dessers scored three goals. He finished the season with 29 goals in 40 matches.

In July 2017, Dessers moved to FC Utrecht, agreeing a contract for three years with an option for an additional year. On 11 August 2017, he scored the first goal in the competition.

After the 2019–20 Eredivisie season was abandoned, Dessers was jointly awarded the Top Goalscorer award alongside Steven Berghuis with fifteen goals each.

On 31 August 2021, Dessers returned to the Netherlands to join Feyenoord on loan with an option to buy. He scored his first goal for the club on 19 September, scoring Feyenoord’s fourth goal in a 0–4 away win against PSV.