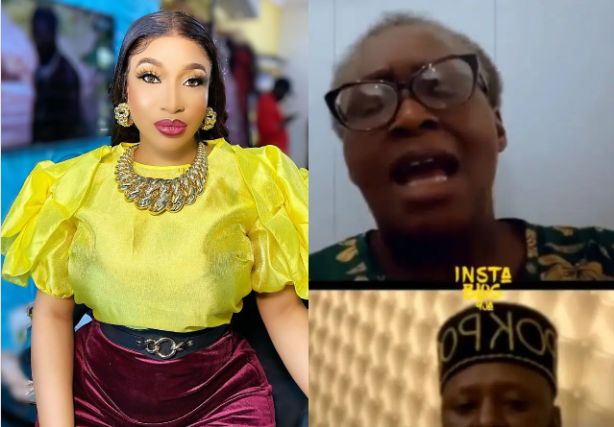 Controversial Nollywood actress, Tonto Dikeh has been dragged online by netizens over her reaction to Kemi Olulonyo’s live video session with her ex, Prince Kpokpogri.

In the video, Kemi Olunloyo claimed that Tonto Dikeh was only bragging and was not behind the demolished building.

In response to the video, Tonto Dikeh took to her social media story to shade Kemi Olunloyo with threats of sending her to jail.

SHE WROTE: IT’S LIKE KEMI WANTS ME TO TALK TO HER OR SOMETHING…

NA OGUN GO HELP ME PUT HER FOR JAIL. MAKE WE START TO DO GO FUND ME FOR YOU AGAIN.

Mixed reactions have been trailing this video as many dragged Tonto Dikeh for responding when she knew nothing about the demolished building.

otunbaayodeji1: I don’t understand why she’s attacking Dr Kemi abi she want to confirm she’s behind the demolition ni cos I don’t get it

socialbutterflyng: Does this require a response? They basically were vindicating her. Hmmm

elvis___ranking: Tonto Dikeh, you weren’t falsely accused of anything…. if you were accused of being responsible for the demolition, thats when you would have been ranting…. please keep quiet… let fight for justice for Deborah

xahhrah: This girl should rest. Internet becoming too toxic.