The former best friends have been clashing and dragging themselves on social media.

Bobrisky in a recent post which he shared via Instagram, claimed that Tonto Dikeh acted ungrateful after everything he did for her.

He claimed she was arrested in Dubai over possession of w33d and he had to risk a huge deal just to stay by her side and help her through the case.

He also alleged that no man stays with Tonto Dikeh because she is allegedly bitter.

He went ahead to share a screenshot of their previous chat where Tonto referred to him as her heaven on Earth. 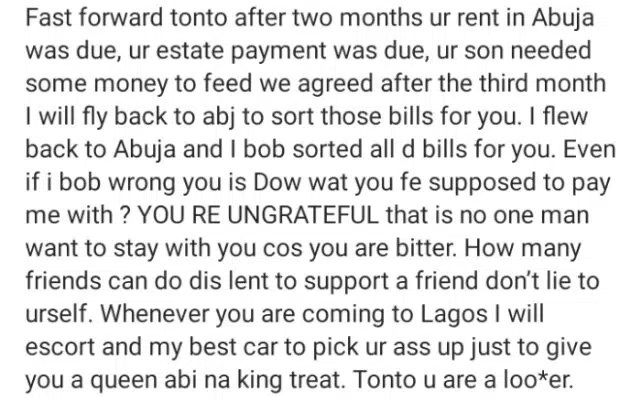 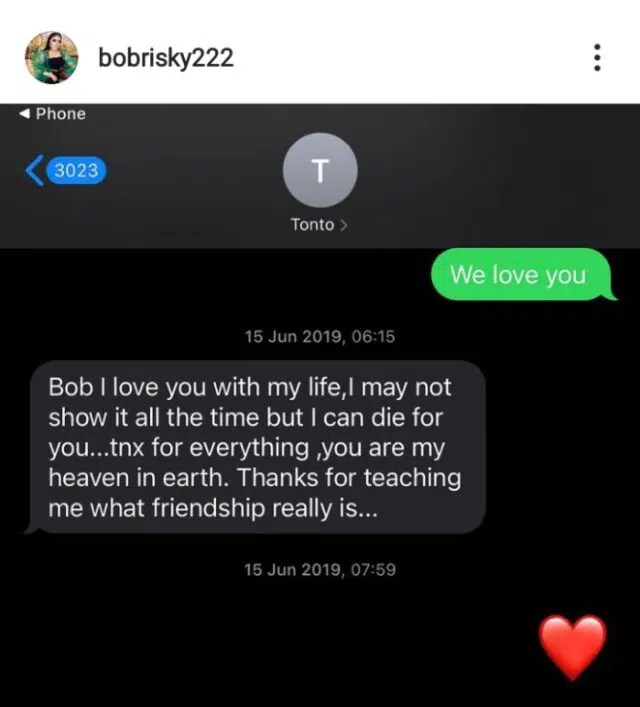 Yesterday, Bobrisky reached out to Kemi Olunloyo over Tonto Dikeh’s threats to her.

Bobrisky told aunty Kemi that Tonto Dikeh cannot do anything, adding that she is just trash and bullshit.

Reacting to Bobrisky’s words, Tonto Dikeh in a post shared on her Instagram page, said whenever she ex a friend, such person becomes dead and irrelevant to her.

She added that God did her bad by giving her ex-friends who are so obsessed with her and are so pained that every time her name is trending over issues, they jump on it.

She wrote: “When I ex you as a friend, you become dead to me, as in your irrelevance would be second to none. I am that friend that when I cut you off, I cut your existence out. But I don’t know why God punishes me with ex-friends who are so obsessed with me and that are so pained that every time my name is brought up they wanna jump like person wey lose em gala”

“If you were dying and I am to comment to make you live, you know I wouldn’t do that, that’s who I am… Omo am blessed but una dey past now, make una stay there ooo.. If I still dey enter your eye talk but am still not taking you back. Period”

On his part, Bobrisky maintained that he is not reversing his statement because he knows Tonto Dikeh well and also reminded the world that the actress is still owing him.

He wrote: “You have asked me to send my account no since last year to pay ur debit till now nothing…. (5million is a lot abeg pay ur debt so i can also balance people I’m owning 😂😂😂😂. Nobody wish to go back to a friend like you, I will choose to remain friendless than to come to you. Before i forget you are still using my phone you borrowed from me ? Don’t worry how i know 😂😂😂😂 aunty borrow borrow sha change 😂😂😂cos ur own fake life pass my own 😂😂😂😂😂😂😂😂😂. I can be calm but bobrisky the IDAMU ADUGBO is always ready to fight !!!!! Lastly you cannot do anything to aunty Kemi cos I’m strongly behind her. If na money let spend as see who win or loose. Have a wonderful day.”